This paper revisits a great number of data from previous studies about the macroscopic force experienced by either objects moving at constant speed and depth inside static granular materials or motionless objects subject to steady granular flows. It focuses on extended objects whose immersed height is equal or close to the thickness of the surrounding granular medium. A simple scaling argument allows demarcating quasi-static from speed-squared force contributions for all the data from different geometries over a very broad range of Froude number. However, a wide scatter of the data is observed in the quasi-static regime. In the first step, a mean-field model is proposed to describe the average force. Mass and momentum balances are applied to a control volume, namely the expected volume of grains disturbed by the object, which is assumed to extend across the whole width and the entire height of the granular system. This allows defining an equivalent length scale which is computed by fitting the force predicted by the model to the available force data. In the second step, a circular shape is assumed for the effective mobilized domain and the associated diameter can be directly extracted from the computed equivalent length scale. This effective diameter is found to vary linearly with both the object width and the thickness of the granular layer moving around the extended object or the immersed depth of the object. The scaling highlights the key role played by the geometry which may enhance the force in the quasi-static regime. 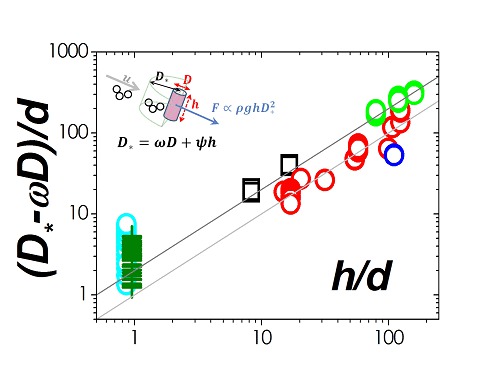