Rare-earth-based nanoparticles (NPs) are widely used as fluorescent probes for imaging in vitro and in vivo. One of the challenges that restrain NPs applications in biomedical research is their effect on subcellular structures. In this paper, the ability of lanthanide NPs to affect the cellular oxidative balance and alter the mitochondrial function was analyzed. Since size and shape mutually affect the cellular internalization and intracellular distribution of NPs, the investigations were performed with NPs of spherical (GdYVO4:Eu3+, spindle-(GdVO4: Eu3+ and rod-like (LaVO4: Eu3+ shapes. Quantitative microfluorimetry with JC-1 (5,5′,6,6′-tetrachloro-1,1′,3,3′-tetraethylbenzimidazolocarbocyanine iodide) as a mitochondrial probe was used for monitoring of the mitochondrial transmembrane potential (ΔΨ m) in single living cells. Changes in the ratio of the JC-1 probe fluorescence were used to analyze the NPs effect on ΔΨ m. The fastest suppressive effect (within 1 hour) was found for spherical NPs. Gradual lowering of ΔΨ m was observed at the exposure of cells within 24 hours for all types of NPs. Exogenous thiols were required for ΔΨ m protection. The protective role of exogenous glutathione (GSH) proves that the increase of reactive oxygen species (ROS) formation with depletion of GSH can mediate NPs toxicity. The dynamics of the shape-dependent effect can be explained by the features of NPs transportation into cells. 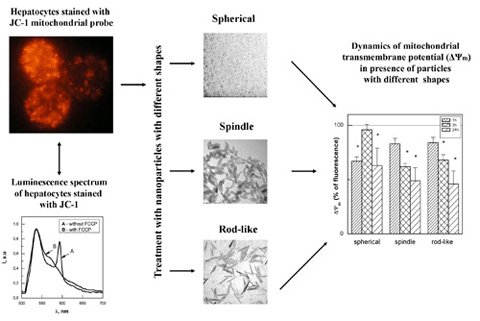