Comparative studies of optical transmission of single-walled carbon nanotubes (SWCNTs) and multi-walled carbon nanotubes (MWCNTs), dispersed in nematic liquid crystal matrix 5CB, were carried out. The data evidence violations of Beer-Lambert-Bouguer (BLB) law both in cell thickness and concentration dependencies. The most striking is the fact that optical transmission dependencies for SWCNTs and MWCNTs were quite different in the nematic phase, but they were practically indistinguishable in the isotropic phase. Monte Carlo simulations of the impact of aggregation on direct transmission and violation of BLB law were also done. The results were discussed accounting for the tortuous shape of CNTs, their physical properties and aggregation, as well as strong impact of perturbations of the nematic 5CB structure inside coils and in the vicinity of CNT aggregates. 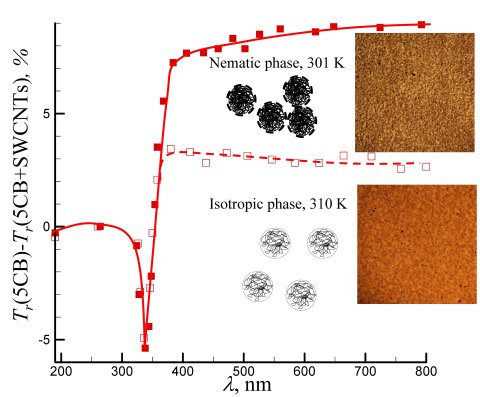