Self-assembly of symmetric A/S-B copolymer melt to gyroid nanostructure, partitioning space into interpenetrating nano-labyrinths (channels), in thin films, is investigated using a minimal lattice model with short-range interactions. This model is relevant to poly(styrenesulfonate)-b -polymethylbutylene melt consisting of three types of segments, A, B and S, corresponding to styrene, methylbutylene and styrenesulfonate, respectively. A single sequence of A, B, and S is used in simulations and the fraction of S segments is fixed at p = 0.647 which corresponds to experimental data. The film thickness, L z , is restricted to nine values (L z = 17 , 22, 26, 30, 34, 42, 51, 60, and 68 in units of the underlying lattice constant). The gyroid nanostructure is found to be stable if the film thickness is equal to or greater than the bulk period of the nanophase. The observed gyroid is referred to as swollen since the volume fraction of two continuous networks made of the B segments is anomalous with respect to that of conventional diblock copolymers. In contrast to bulk state, we do not directly observe the order-disorder transition to the gyroid nanophase for thin films. In this case, however, simulations indicate a direct order-disorder transition to a lamellar phase and the order-disorder transition temperature is higher than that in the bulk state, varying strongly with the film thickness. 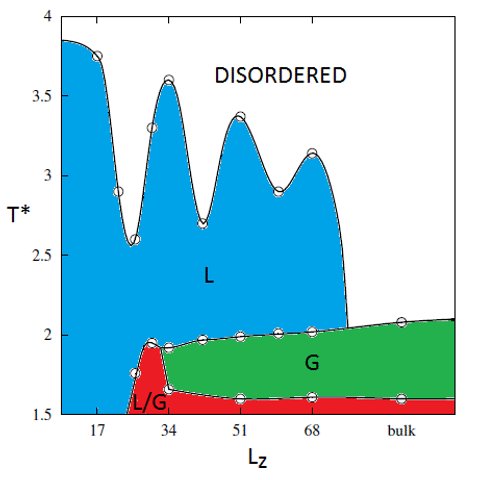