The evolution of an incompletely connected system of species with speciation and extinction is investigated in terms of random replicators. It is found that evolving random replicator systems with speciation do become large and complex, depending on speciation parameters. Antisymmetric interactions result in large systems, whereas systems with symmetric interactions remain small. A co-dominating feature is within-species interaction pressure: large within-species interaction increases species diversity. Average fitness evolves in all systems, however symmetry and connectivity evolve in small systems only. Newcomers get extinct almost immediately in symmetric systems. The distribution in species lifetimes is determined for antisymmetric systems. The replicator systems investigated do not show any sign of self-organized criticality. The generalized Lotka-Volterra system is shown to be a tedious way of implementing the replicator system. 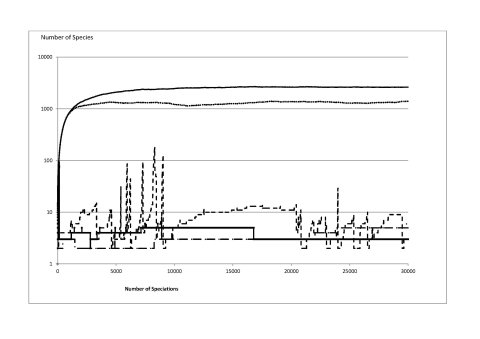