A liquid film is studied that is deposited onto a flat plate that is inclined at a constant angle to the horizontal and is extracted from a liquid bath at a constant speed. We analyse steady-state solutions of a long-wave evolution equation for the film thickness. Using centre manifold theory, we first obtain an asymptotic expansion of solutions in the bath region. The presence of an additional temperature gradient along the plate that induces a Marangoni shear stress significantly changes these expansions and leads to the presence of logarithmic terms that are absent otherwise. Next, we numerically obtain steady solutions and analyse their behaviour as the plate velocity is changed. We observe that the bifurcation curve exhibits collapsed (or exponential) heteroclinic snaking when the plate inclination angle is above a certain critical value. Otherwise, the bifurcation curve is monotonic. The steady profiles along these curves are characterised by a foot-like structure that is formed close to the meniscus and is preceded by a thin precursor film further up the plate. The length of the foot increases along the bifurcation curve. Finally, we prove with a Shilnikov-type method that the snaking behaviour of the bifurcation curves is caused by the existence of an infinite number of heteroclinic orbits close to a heteroclinic chain that connects in an appropriate three-dimensional phase space the fixed point corresponding to the precursor film with the fixed point corresponding to the foot and then with the fixed point corresponding to the bath. 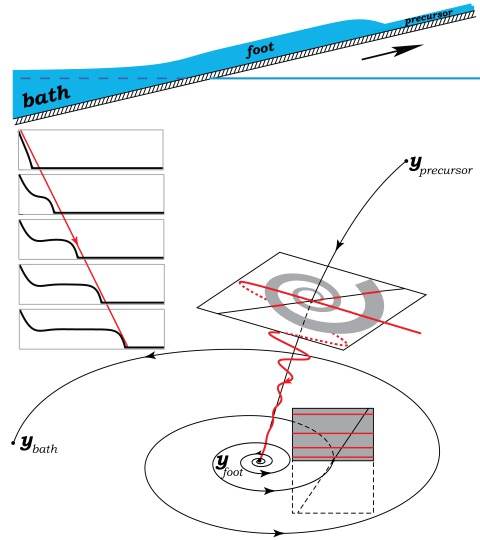