Heat transfer in the thermo-electro-hydrodynamic convection under microgravity conditions

This article deals with the thermal convection in a dielectric fluid confined in a finite-length plane capacitor with a temperature gradient under microgravity conditions. The dielectrophoretic force resulting from differential polarization of the fluid plays the role of buoyancy force associated with an electric effective gravity. It induces the convection when the Rayleigh number based on this electric gravity exceeds a critical value. Two-dimensional numerical simulation for a geometry with a large aspect ratio is used to determine the convective flow in the saturated state. The Nusselt number Nu is computed for a wide range of Prandtl number (0.01 ≤ Pr ≤ 103) and its dependence on the distance from the critical condition is determined. A correlation between Nu and Pr in the vicinity of criticality is obtained and compared with that of the Rayleigh-Bénard convection. The behavior of the convection is analyzed in detail from an energetic viewpoint: electrostatic energy, power inputs by different components of the electric gravity and viscous and thermal dissipations are computed. 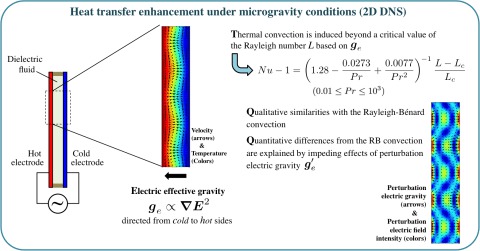