The dynamics and adsorption behavior of a single collapsed homopolymer on a surface in shear flow is investigated by means of Brownian hydrodynamics simulations. We study different homogeneous and inhomogeneous surface models and determine dynamic state diagrams as a function of the cohesive strength, the adhesive strength, and the shear rate. We find distinct dynamical adsorbed states that are classified into rolling and slipping states, globular and coil-like states, as well as isotropic and prolate states. We identify two different cyclic processes based on trajectories of the polymer stretching and the polymer separation from the surface. For adsorption on an inhomogeneous surface consisting of discrete binding sites, we observe stick-roll motion for highly corrugated surface potentials. Although the resulting high surface friction leads to low drift velocities and reduced hydrodynamic lift forces on such inhomogeneous surfaces, a shear-induced adsorption is not found in the presence of full hydrodynamic interactions. A hydrodynamically stagnant surface model is introduced for which shear-induced adsorption is observed in the absence of hydrodynamic interactions. 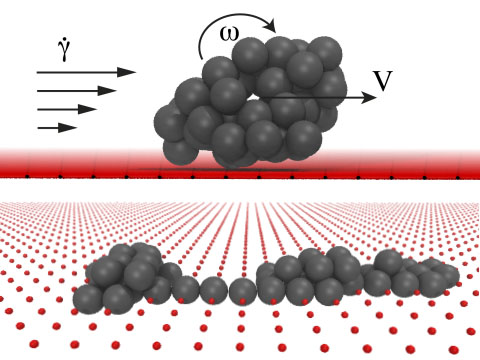