Granular pastes are dense dispersions of non-colloidal grains in a simple or a complex fluid. Typical examples are the coating, gluing or sealing mortars used in building applications. We study the cohesive rupture of thick mortar layers in a simple pulling test where the paste is initially confined between two flat surfaces. After hardening, the morphology of the fracture surfaces was investigated, using either the box counting method to analyze fracture profiles perpendicular to the mean fracture plane, or the slit-island method to analyze the islands obtained by cutting the fracture surfaces at different heights, parallel to the mean fracture plane. The fracture surfaces were shown to exhibit scaling properties over several decades. However, contrary to what has been observed in the brittle or ductile fracture of solid materials, the islands were shown to be mass fractals. This was related to the extensive plastic flow involved in the fracture process. 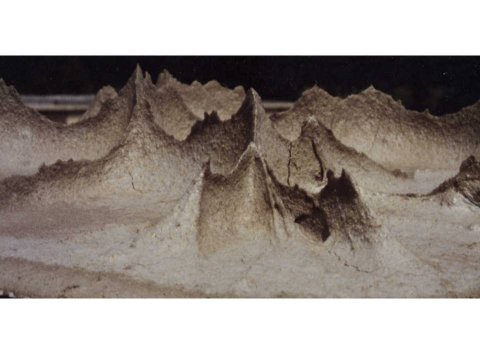