While the steady-state existence in the size and shape of liquid-ordered microdomains in cell membranes, the so-called “lipid rafts”, still remain the subject of debate, glycosphingolipid-cholesterol rich regions in plasma membranes have been considered to have a function as platforms for signaling and sorting. In addition, recent spectroscopic studies show that the interaction between monosialoganglioside and amyloid beta (Aβ protein promotes the transition of Aβ from the native structure to the cross-beta fold in amyloid aggregates. However, there is few evidence on the dynamics of “lipid rafts” membranes. As the neutron spin-echo (NSE) technique is well known to detect directly slow dynamics of membrane systems in situ, by the combination of NSE and small-angle X-ray scattering we have studied the effect of the interaction between raft-model membrane and amyloid Aβ proteins on the structure and dynamics of a large uni-lamellar vesicle (LUV) consisting of monosialoganglioside-cholesterol-phospholipid ternary mixtures as a model of lipid-raft membrane. We have found that the interaction between the Aβ proteins and the model membrane at the liquid crystal phase significantly suppresses a bending-diffusion motion with a minor effect on the LUV structure. The present results would suggest a possibility of non-receptor-mediated disorder in signaling through a modulation of a membrane dynamics induced by the association of amyloidogenic peptides on a plasma membrane. 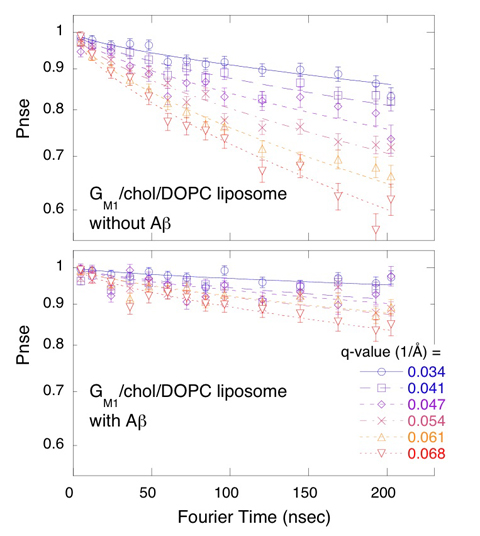