Development of forms in living organisms is complex and fascinating. Morphogenetic theories that investigate these shapes range from discrete to continuous models, from the variational elasticity to time-dependent fluid approach. Here a mixture model is chosen to describe the mass transport in a morphogenetic gradient: it gives a mathematical description of a mixture involving several constituents in mechanical interactions. This model, which is highly flexible can incorporate many biological processes but also complex interactions between cells as well as between cells and their environment. We use this model to derive a free-boundary problem easier to handle analytically. We solve it in the simplest geometry: an infinite linear front advancing with a constant velocity. In all the cases investigated here as the 3 D diffusion, the increase of mitotic activity at the border, nonlinear laws for the uptake of morphogens or for the mobility coefficient, a planar front exists above a critical threshold for the mobility coefficient but it becomes unstable just above the threshold at long wavelengths due to the existence of a Goldstone mode. This explains why sparsely bacteria exhibit dendritic patterns experimentally in opposition to other colonies such as biofilms and epithelia which are more compact. In the most unstable situation, where all the laws: diffusion, chemotaxis driving and chemoattractant uptake are linear, we show also that the system can recover a dynamic stability. A second threshold for the mobility exists which has a lower value as the ratio between diffusion coefficients decreases. Within the framework of this model where the biomass is treated mainly as a viscous and diffusive fluid, we show that the multiplicity of independent parameters in real biologic experimental set-up may explain varieties of observed patterns. 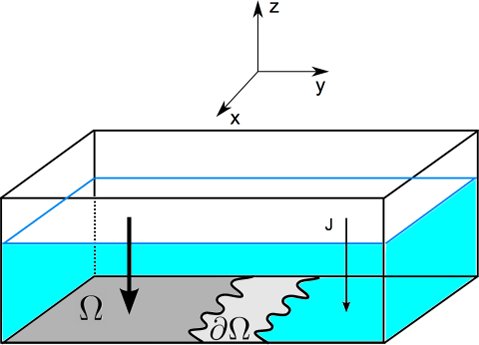