In this work we focus on the surface charging properties of core shell ferrite nanoparticles dispersed in water, namely magnetic nanocolloids. This structural charge results from the Brönsted acid-base behavior of the particles surface sites and is achieved through hydrolysis reactions. It can be modeled by considering identical charged sites behaving as weak diprotic acids. Then, electrochemical techniques could be implemented to study the acid-base equilibrium between the particle surface and the colloid bulk solution. Simultaneous potentio-conductimetric titrations are therefore performed to determine the thermodynamical constants of the p H-dependent reactions and to obtain the p H variations of the surface charge density. The results reveal that the saturation value of the structural charge strongly depends on the nanoparticle mean size. For large particles, the surface tends to be fully ionized whereas for smaller particles the saturated structural charge decreases drastically. This surface charge reduction is attributed to the existence in smaller particles of metallic surface sites, which cannot be accessible to the proton charge. The existence of such dead sites would be related to hydroxo-bonded sites with very low acidity combined with a quantum size effect, which would affect the charging/discharging process at the surface of the semiconductor ferrite quantum dot. 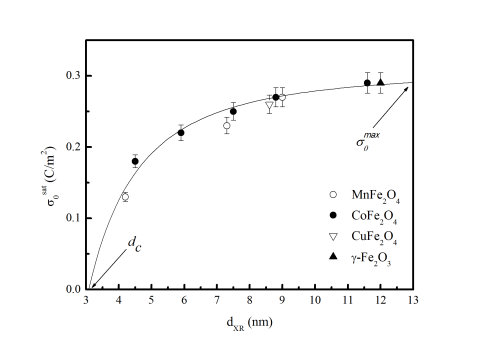