We investigate experimentally the runout resulting from the collapse of a granular column containing two particle species that differ in size only. The experimental configuration is strictly two-dimensional (only one particle per width of the experimental tank) and we explore both the role of the initial arrangement and proportion of the two particle sizes in the column, using high-speed videography, and by determining the centres of mass of the big and small particles in the initial column and the final deposit. The duration of the experiment is sufficiently short that large-scale segregation does not occur, however, we find a clear dependence of runout on both initial mixture arrangement and proportion for all conditions. We investigated this observation through detailed analysis of the flow front motion, and identify a characteristic “stopping” phase when dissipation dominates, and we apply a shallow layer model at the flow front to show how the initial mixture arrangement and proportion influence the effective coefficient of friction during emplacement. We find that a bidispersed mixture can induce a larger friction on emplacement than a monodispersed mixture, and the highest coefficient of friction was found for a well-mixed initial arrangement of particles at the proportion that shows maximum horizontal spreading of the flow. These observations suggest that downwards percolation of fine particles takes place at the front of the collapsing column, and so localised size segregation processes at the flow front can control flow mobility. This effect is likely to be important in controlling the mobility of large geophysical flows that occur on finite time scales, and whose deposits typically show granular segregation at the front and edges but not throughout the entire deposit. 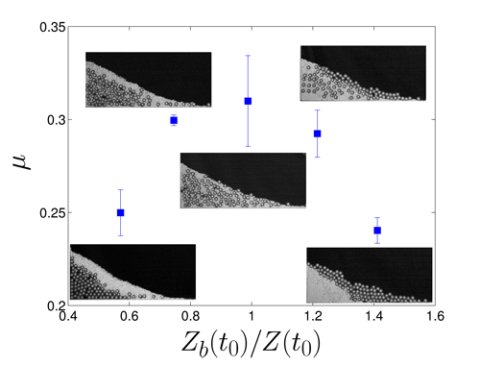