Some materials, and in particular some polymer materials, can display an important range of stress levels for which slow and progressive damage can be observed before they finally break. In creep or fatigue experiments, final rupture can happen after very long times, during which the mechanical properties have progressively decayed. We model here some generic features of the long-time damage evolution of disordered elastic materials under constant load, characterized by a progressive decrease of the elastic modulus. We do it by studying a two-dimensional electric random fuse network with quenched disorder and thermal noise. The time evolution of global quantities (conductivity or, equivalently, elastic modulus) is characterized by different regimes ranging from faster than exponential to slower than logarithmic, which are governed by the stress level and the relative magnitude of disorder with respect to temperature. A region of widely distributed rupture times exists where the modulus decays (more slowly than) logarithmically for not too small values of the disorder and for not too large values of the load. A detailed analysis of the dynamical regimes is performed and presented through a phase diagram. 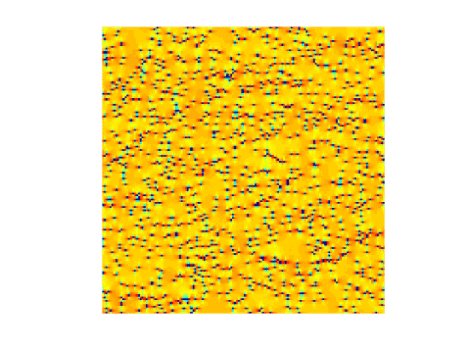