Pattern formation of desiccation cracks on a layer of a calcium carbonate paste is studied experimentally. This paste is known to exhibit a memory effect, which means that a short-time application of horizontal vibration to the fresh paste predetermines the direction of the cracks that are formed after the paste is dried. While the position of the cracks (as opposed to their direction) is still stochastic in the case of horizontal vibration, the present work reports that their positioning is also controllable, at least to some extent, by applying vertical vibration to the paste and imprinting the pattern of Faraday waves, thus breaking the translational symmetry of the system. The experiments show that the cracks tend to appear in the node zones of the Faraday waves: in the case of stripe-patterned Faraday waves, the cracks are formed twice more frequently in the node zones than in the anti-node zones, presumably due to the localized horizontal motion. As a result of this preference of the cracks to the node zones, the memory of the square lattice pattern of Faraday waves makes the cracks run in the oblique direction differing by 45 degrees from the intuitive lattice direction of the Faraday waves. 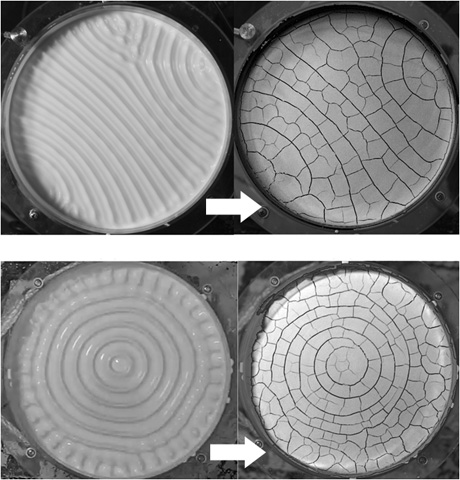