The mechanical properties of aggregated colloids depend on the mutual interplay of inter-particle potentials, contact forces, aggregate structure and material properties of the bare particles. Owing to this variety of influences, experimental results from macroscopic mechanical testings were mostly compared to time-consuming, microscopic simulations rather than to analytical theories. The aim of the present paper was to relate both macroscopic and microscopic mechanical data with each other and simple analytical models. We investigated dense amorphous aggregates made from monodisperse poly-methyl methacrylate (PMMA) particles (diameter: 1.6

m via nanoindentation in combination with confocal microscopy. The resulting macroscopic information was complemented by the three-dimensional aggregate structure as well as the microscopic strain field and strain tensor. The measured strain field and tensor were in reasonable agreement with the predictions from analytical continuum theories. Consequently, the measured force-depth curves could be analyzed within a theoretical framework that had been frequently used for nanoindentation of atomic matter such as metals, ceramics and polymers. The extracted values for hardness and effective Young’s modulus represented average values characteristic of the aggregate. On the basis of of these parameters we discuss the influence of the strength of particle bonds by introducing polystyrene (PS) between the particles. 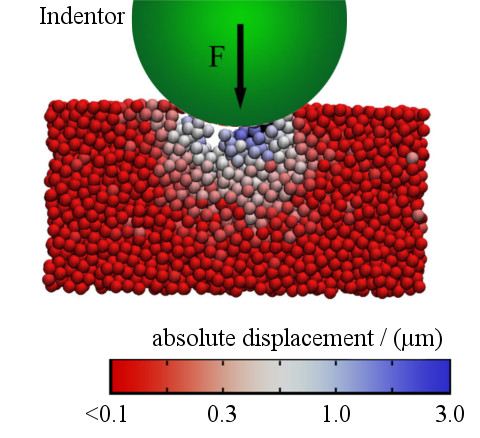