We examine the spreading of cellular aggregates deposited on adhesive striated glass surfaces consisting of 100μm large bands alternatively coated with fibronectin and with PolyEthyleneGlycol-Poly-L-lysine (PEG-PLL). The aggregates spread confined to the adhesive fibronectin bands. A front of cells expands from the aggregate at constant velocity. In comparison, the radial spreading of an aggregate on the uniform fibronectin coated glass surface obeys a diffusive law. We develop a common theoretical model in agreement with our experimental observations to describe the apparently disparate spreading kinetics of cellular aggregates. These results demonstrate the dominant role of the permeation in the expansion of the precursor film of cells around the aggregate. 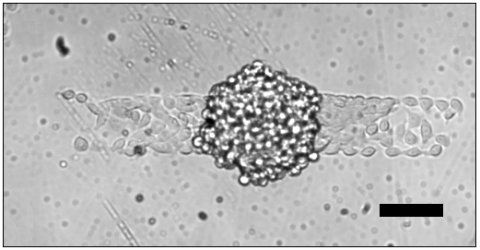