By using microrheological methods commonly employed in videomicroscopy experiments, we study the rheology of a two-dimensional computational fluid formed by Brownian disks with the aim of exploring the influence of some effective colloid-colloid attractive interactions. The model of fluid is developed by Brownian dynamics simulations without hydrodynamical interactions, and it is characterized by calculating its equation of state from the pair distribution function. Micromechanical properties, relative and intrinsic viscosity and freezing are discussed. Then, we include attractive forces such a Asakura-Oosawa depletion force or an empiric expression proposed by Grier and Hal (GH) for an anomalous electrostatic potential observed in confined and charged colloids. By using both potentials, viscosity is clearly increased, but when the GH potential is included, viscoelastic gel state is reached for intermediate values of surface concentration. Finally, we analyse the influence of the attractive potentials in the breaking-up by thermal fluctuations of linear chains formed by 2D particles, finding that the GH potential reduces the characteristical time at which the disks can be considered as disaggregated. In this work, we employ an experimental-like methodology for the study of a Brownian hard-disk fluid, providing a very useful link with experimental procedures. 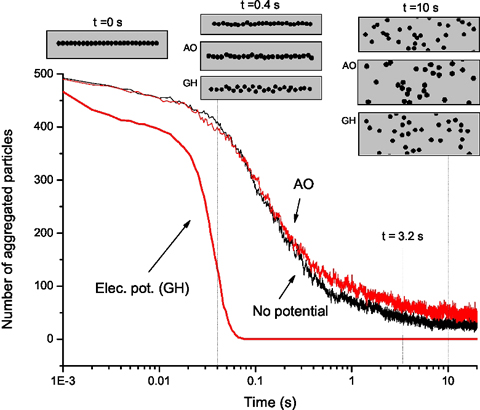