Recently the nontrivial spatial and temperature dependence of the surface-induced weak planar orientational order parameter Q(z, T) was determined just above the isotropic-nematic (IN) phase transition point (Ji-H. Lee et al., Phys. Rev. Lett. 102, 167801 (2009)). In this paper we present a theoretical explanation of the observed behaviour. We obtain expressions for the short-range and long-range contributions to the interface potential of the induced nematic film and specify the repulsive character of the interaction between the soft IN interface and the external bounding substrate. It is shown that the small value of the IN interfacial tension results in the renormalization of the repulsive interaction potential due to the thermal fluctuations of the soft IN interface. This leads to an increase of the equilibrium thickness of the induced nematic film and the appearance of a step-like orientational order parameter profile. We find that only renormalized short-range and thermal pseudo-Casimir interactions are essential for the appearance of the induced nematic film, which provide the observed thickness, h ∼ 30 nm, of this film. The long-range van der Waals interaction is shown to be negligibly small and the dominant role is played by the renormalized short-range repulsion. Fitting of the experimental order parameter profiles (Ji-H. Lee et al. (2009)) with the expressions based on these interactions makes it possible to determine the material parameters of the system, including the amplitudes of the surface interaction, the IN interfacial tension and the interfacial coherence length. The agreement between theory and experiment confirms the importance of the interface fluctuation renormalization of the interface potentials for soft interfaces. 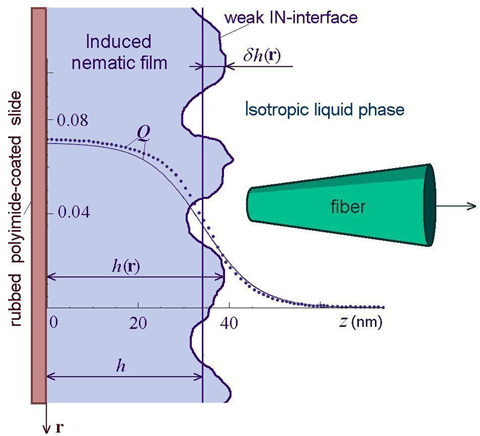